Welcome to the
Ballyshannon Show Online


One of the highlights of the Irish summer, the 2022 Ballyshannon Agricultural Show takes place on Sunday 21st August.

To get a flavour of the event why not check out our image gallery on Facebook?

Exhibitors should note the following points with particular care

All Exhibitors to Pay Admission to the Show Grounds
IMPORTANT: It is recommended by the ISA that all Exhibitors have their own insurance cover.

The following changes are being introduced for keepers of bovine animals who wish to show cattle  these changes apply from the 2013 Show season.

Keepers of cattle are now required to obtain a Certificate of Compliance prior to the movement of an animal to a show.

Certificates of compliance can be obtained online from the Animal Identification and Movement (AIM) system through the www.agfood.ie facility or from the Cattle Movement Notification Agency.

When applying for a Certificate of Compliance, Keepers should not specify a destination herd.

On the day of the Show, the Certificate of Compliance should be presented to the Show Secretary along with the bovine passport for the animal.

The keeper and the Show Secretary will then sign the Movement Notification section of the Certificate which will then be sent to the local DVO for recording into the AIM system.

Please not that only cattle for which a valid Certificate of Compliance is provided to the Show Secretary will be allowed to the shown on the day of the show.

These Certificates will replace the previously-used CMMS 4 forms.

The ISA would advise all Animal owners who have their Animals insured to have the Insurance cover them while showing Animals at Shows.We understand that it costs very little or nothing at all depending on whom you have Insurance cover with.

If you are one of the few who dont have cover we would advise that you think about putting it in place for this purpose. It may be well worthwhile.

The reason for us giving you this advice is to protect yourself in the event of your animal lashing out, and injuring someone or damaging someones property, if that were to happen, and it is established that your animal was out of your control you may be held responsible, or partly responsible for any injury or damage caused and may end up paying, all or part of any settlement reached. 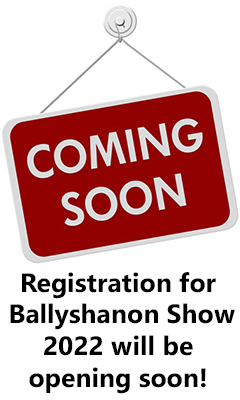 Some links to websites which exhibitors, spectators and friends of the show may find useful.